The audit was carried out on data from 292,633 pregnancies screened as part of the routine screening service provided by the Wolfson Institute of Preventive Medicine Screening Service in London, England.  The pregnancies were screened using the first trimester Combined test (NT, PAPP-A and free ß hCG together with maternal age).  The risk of a pregnancy being affected with Down’s syndrome was calculated by the αlpha software using the statistical parameters and methods described in the Serum, Urine and Ultrasound Screening Study (SURUSS) study (references 1 & 2).  Risks greater than or equal to 1 in 150 at term were screen positive for Down’s syndrome.

i) Use of Validation Plots to determine accuracy of risk estimation

839 of the 292,633 pregnancies screened were affected with Down’s syndrome.  Each affected screened pregnancy was identified using the αlpha software database and pregnancy outcome recorded. 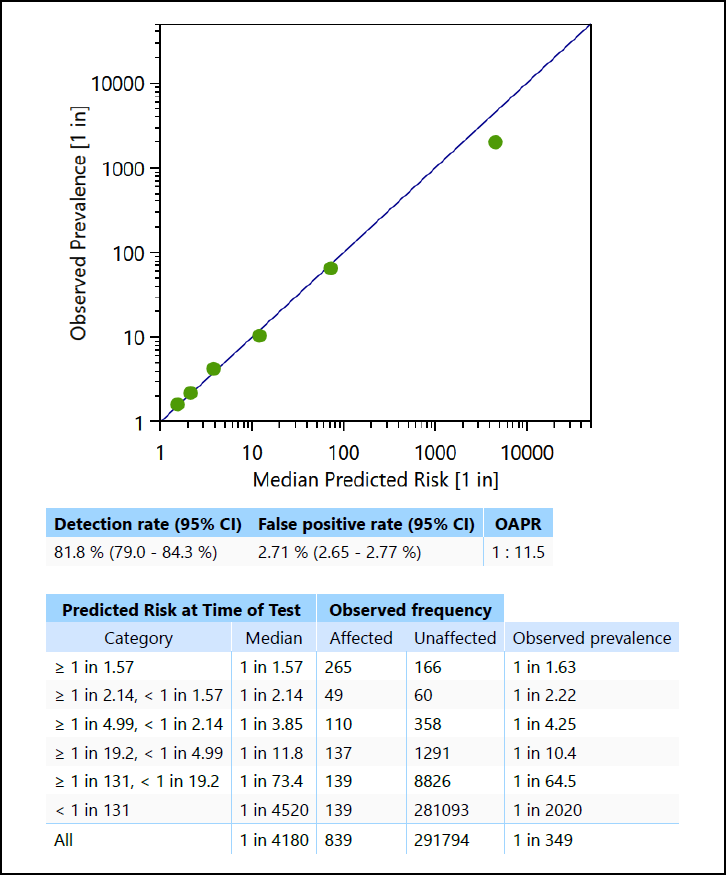 αlpha was used to calculate the expected screening performance for the first trimester Combined test at a risk cut-off of 1 in 150 at term with the age distribution in the screened population using the methods described in the SURUSS study.  The table below shows that the expected screening performance is remarkably close to that observed in the audit.